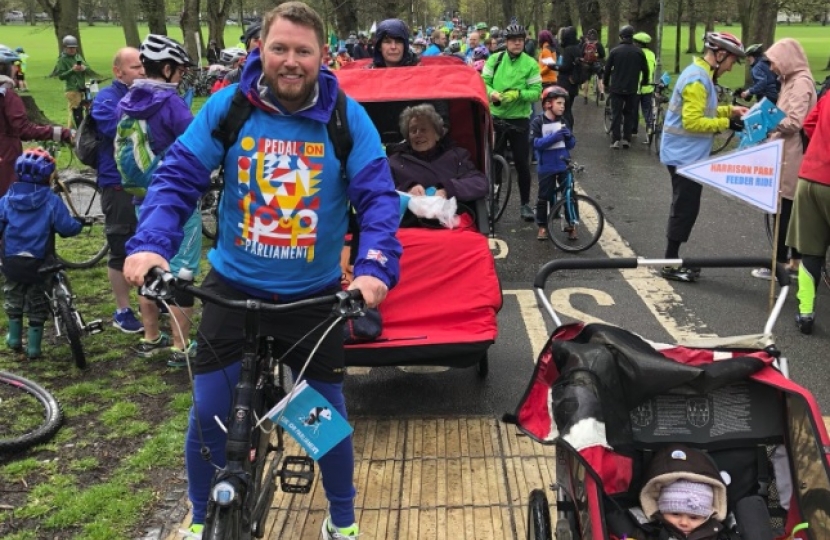 On the weekend, local MSP Jamie Greene took part in the ‘Pedal on Parliament’ event in Edinburgh, where the public and MSPs from across the political spectrum took part in a bicycle ride in order to promote the benefits of cycling.

Jamie now wants to promote active travel in the West Scotland Region, citing the great health and environmental benefits switching from cars to bicycles can bring.

The West Scotland MSP highlighted the lack of cycle infrastructure in places such as North Ayrshire and Inverclyde being an obstacle that needed to be addressed in order to ensure that cycling is a viable option of travel for many in the west.

“The Pedal on Parliament event was a great opportunity for MSPs and the local community to ditch their car and put their helmet on and take a wee cycle round Scotland. I thoroughly enjoyed the ride and felt better for the experience.

“I’d like to see cycling initiatives brought to the west of Scotland. We live in such a beautiful part of the world that we should take the time to grab our bikes and enjoy the scenery, especially as the weather is turning a wee bit more bearable!

“Part of the problem is the lack of cycling infrastructure in the west. At the moment it’s a bit of a hazard to try and cycle from Largs to Greenock, or even down to Irvine. If we’re serious at promoting active travel, then we need to have a serious conversation about getting cycle lanes built. There’s a lot to consider and I will be raising this issue with the transport minister in my next meeting with him.”