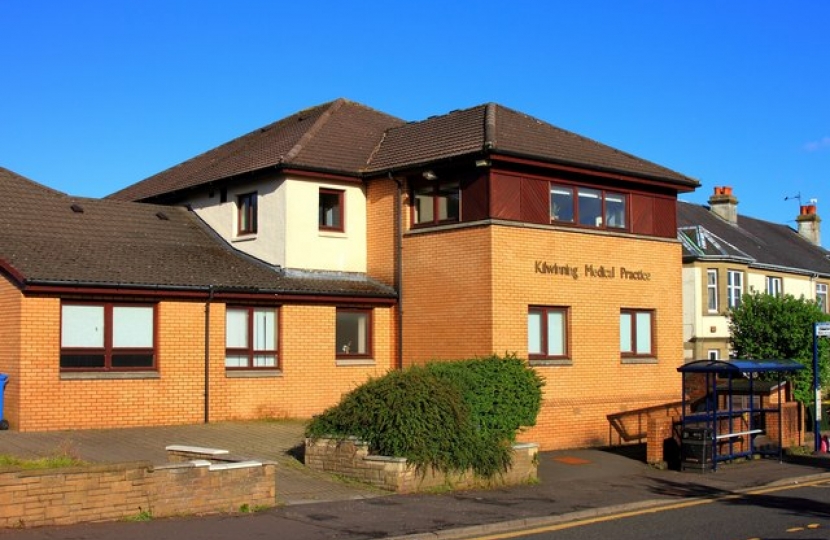 Local MSP Jamie Greene has raised concern over changes being made to Kilwinning Medical Practice that will be in place for at least twelve months. He was made aware of concerns after receiving a letter from his local practice.

Under the new changes, anybody new moving into the Three Towns, West Kilbride and Kilwinning area, will be allocated a practice by NHS Ayrshire and Arran rather than being able to register at their local surgery and be assigned a GP. Under usual rules patients moving into a new area would typically register at a practice of their choosing within designated catchment areas.

In a letter recently sent to existing Practice customers, the GPs at Kilwinning Practice laid out the plans for the closure of the “new patients list”. It stated that “recruitment difficulties have affected a number of practices in the area. In taking the following action, we are attempting to alleviate the effects of this issue in North Ayrshire.”

Jamie has previously raised the issue of GP recruitment in North Ayrshire and its impact on the local community. In September 2017 he held a Member’s Debate in the Scottish Parliament on the issue when West Kilbride GP Surgery experienced difficulties in recruiting sufficient GPs to meet patient demand which culminated in the practice handing its contract back to the health board.

“Difficulties with GP recruitment continue to impact the provision of health services in North Ayrshire. Last year we saw West Kilbride GP Surgery struggle to meet patient demands and this news shows that Kilwinning is now starting to feel the pressures of patient demand.

“On one hand we’re trying to attract families to come to North Ayrshire and make it their home, grow the local economy here, make it an attractive place to live and work and on the other we’re telling them that they might have to register with a medical practice miles away from their home. It’s a serious consideration for people, especially those with children, when looking at where to move to.

“By closing the new patient list, it effectively means you have to hope the local health board will be able to find you a doctor who will see you when needed. This practice is happening right across Scotland and is a shocking reflection of a decade long problem of poor workforce planning in the Scottish NHS.

“We need to have serious discussions around local GP recruitment and how we can attract enough doctors here to meet basic patient demand. People no longer have a family doctor, they’re seen on one-off emergency appointments or by temporary locums a lot of the time. Having that familiar contact with a regular doctor does matter a great deal. This is another blow to local residents in North Ayrshire.”