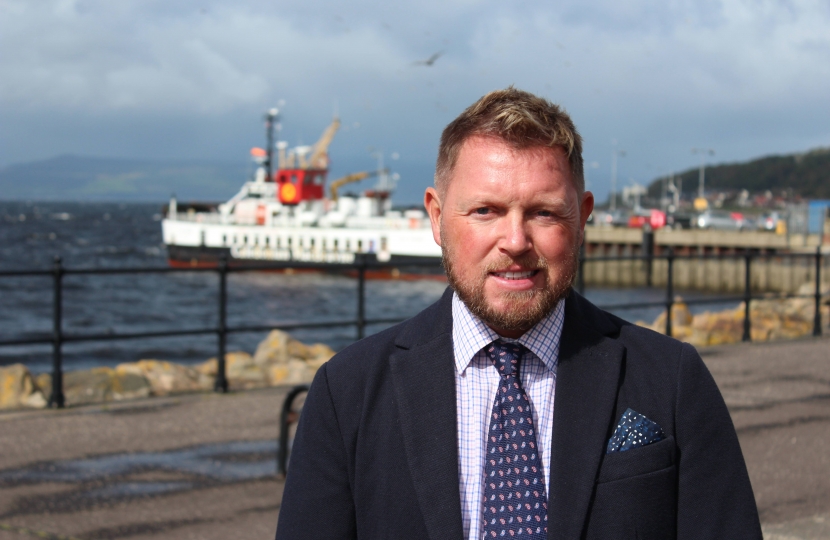 Jamie Greene MSP has been announced as the Scottish Conservative candidate for Cunninghame North in the 2021 Scottish Parliamentary election, in the same week as his promotion to the Conservative front bench in Holyrood as the new Shadow Cabinet Secretary for Transport, Infrastructure and Connectivity.

Following his re-selection last week, Mr Greene will contest the seat at the Scottish Parliamentary elections set to be held in 2021. He stood for the North Ayrshire and Arran seat in the 2016 General Election and the following year in 2016 Scottish Parliament election, increasing his party’s vote share by 11 per cent and was elected on the regional list as an MSP.

The Scottish Conservatives are currently the official opposition to the SNP Government in the Scottish Parliament. The Largs-based politician takes on the role as Shadow Cabinet Secretary for Transport, Infrastructure and Connectivity having previously been the shadow digital and transport minister.

Commenting on the news, Mr Greene expressed his delight at being chosen as the candidate for the next Holyrood election and has promised to provide North Ayrshire and Arran with a voice at the Scottish Parliament.

The incumbent MSP for Cunninghame North is Kenneth Gibson MSP of the SNP. Mr Greene is the first horse to be announced in the race for Holyrood ’21.

“I’m delighted to have been promoted to Jackson Carlaw’s front bench in the Scottish Parliament and for being selected to contest the Cunninghame North seat in 2021. These are difficult and divisive times in politics but we also need to come together and look after the everyday things that matter to people.

“For too long North Ayrshire and Arran has lacked a voice in both our parliaments. Over the next 18 months, I will make my case that it is time we had an MSP who had the guts to stand up the SNP government in Holyrood. One who believes in the UK and one who actually respects the results of every referendum that Scotland has faced.

“After many years of SNP failures and mismanagement in charge of Scotland, be it NHS waiting times, GP and teacher shortages, our crumbling roads, higher taxes,  the new Arran ferry fiasco, and our underfunded local council, I think it’s about time people got the MSP they deserve. Not one who acts like a nodding dog to their Ministers in Edinburgh, but one who is already fighting on their behalf, right now,  every day in parliament.

“I am also immensely proud to have been appointed to the new Shadow Cabinet. I will work closely with our interim leader and support him in any way I can to improve transport, connectivity and make a case for Scotland’s future infrastructure.

This week, Richard Wilkinson, North Ayrshire and Arran Conservative Chairman congratulated Jamie on his double success and said that he was delighted that a 'rising star' of the Scottish Conservatives would be their candidate in 2021.

He commented "Even now as a West Of Scotland list MSP, Jamie has maintained strong links with Ayrshire and the seat he fought in 2016.  At the selection meeting, the party members pledged to work for his victory at the next election. I would encourage others to step forward and volunteer their time to help elect Jamie as the local MSP and give North Ayrshire and its island communities proper representation in Holyrood."