Born and raised in North Ayrshire, Tom was educated at Largs Academy and Ardrossan Academy.  He graduated from Glasgow University with a B.Sc. in Science/Mathematics and worked for British Steel in Lanarkshire and British Aluminium in Invergordon.  He later entered the Teaching Profession and taught for some time in Glasgow before transferring to Largs Academy where he was Assistant Principal Teacher of Mathematics for a number of years.

He has long experience of Local Government and at the 2017 Council Election achieved the highest vote of any elected Councillor in North Ayrshire. He can be contacted on 07971198628 or at tommarshall@north-Ayrshire.gov.uk

On Saturday, local MSP Jamie Greene attended a “sit-down” protest on Millport Pier on the Island of Cumbrae with other elected officials and members of the public to protest North Ayrshire Council’s plan to demolish Millport Pier.

"The Seven Scottish Conservative and Unionist Councillors now form a pivotal group on the 33 Member North Ayrshire Council. Labour and the SNP have 11 Councillors each and cannot form a majority Administration (needs 17 Councillors) without support from the other Parties.

The Scottish Conservatives have had a tremendous result in the local elections across Scotland, including in North Ayrshire Council, where we have gained 6 councillors, taking our local representation from 1 to 7 councillors.

Over 3500 householders in the North Coast area will shortly get early warning letters from the Finance Department of North Ayrshire Council to tell them that due to a decision by the SNP Government, their Council Tax Bills , for the next financial year 2017-18 , will increase substantially. 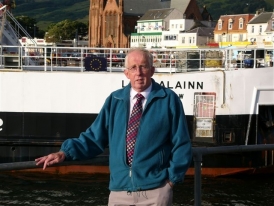 Haylie House Board of Trustees